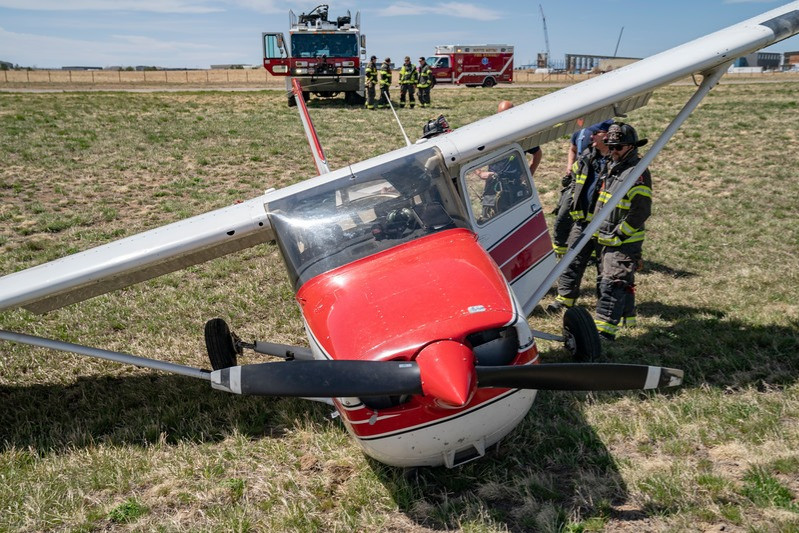 At 11:30 a.m. on Tuesday, April 19, 2022, Local members responded to an aircraft emergency at Centennial Airport. A Cessna 172 was landing when it left Runway 28, hit a sign, and stopped in the grassy area between Runway 10/28 and the Charlie Taxiway. Air Traffic Controllers declared an emergency and used a digital notification system that simultaneously alerted SMFR Dispatchers and crews at nearby Station’s 35 and 44 that an incident occurred. While the Aircraft Rescue and Firefighting (ARFF) personnel were responding, Dispatch, Airport Operations personnel and Air Traffic Controllers shared additional information and coordinated the emergency response. Once on scene, the ARFF units positioned for possible fire suppression and rescue needs. Red 1 positioned at the nose or 12 o’clock position, Red 2 positioned at the 10 o’clock position to protect the exit path for occupants and Red 3 positioned at the tail or 6 o’clock position. Two Medic units also responded and thankfully both occupants of the plane were not injured. Members checked the aircraft for hazards like leaking fuel and smoke conditions and verified there were none. The FAA and NTSB will review the incident and release their findings once their investigation is complete.